Tips for choosing the right copiers and printers

Discover the most frequently asked Copiers and printers questions

Where should a photocopier be placed? 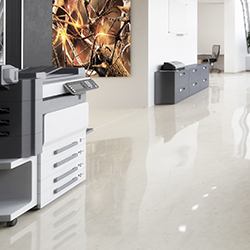 Where should photocopiers be placed is not such an innocent question as it may seem. Photocopiers can be hazardous devices and caution should apply. In fact, universities and local government departments around the world has issued guidelines so that photocopiers should be places at the most appropriate location in an office.

The following recommendations have been issued:

- to prevent users from possible injuries, office staff should not sit within 4 metres of the photocopier;

- photocopiers should be places in a rather big room, with 45 cubic metres as a safe estimate;

- heavy-duty photocopiers should be placed in specific, separate rooms with mechanical ventilation;

Fill in this form to compare up to 4 quotes:

Caution should also apply regarding other elements, such as:

- noise and heat produced by the photocopiers, which can cause fatigue and stress, photocopiers should therefore be placed in areas where these nuisances can have the least possible effect;

- regular cleaning and maintenance should also be taken care of;

- extra care should be applied when replacing toners or refilling them;

- safe disposal of consumables should also be taken care of.